Every hunter and fisher knows that the success of their day out lies in having the best fillet knife on hand. Why? Because there’s no point in catching your favorite fish and failing to skin it and fillet it effectively. For home chefs, that perfect fillet is no less important.

And I have a pretty good idea that’s why you’re here. You’re looking for a fillet knife, if not only for the woods, probably for your kitchen as well. Before we look at a few pieces that you definitely need to consider, let’s get a few things cleared out of the way first.

What Is a Fillet Knife

In order to recognize a fillet knife when it stares you in the face, you will first of all need to understand the purpose and design of a fillet knife.

Purpose of a fillet knife

A fillet knife is primarily for one thing — precision. It is the perfect knife for removing scales and bones from fish, which is its main use after all. But fillet knives go beyond just fish. You can use fillet knives to skin game, trim fat, devein, fillet, and even when preparing fruit and vegetables. In fact, you can compare a fillet knife to a surgeon’s scalpel because both are perfect for delicate work.

Purpose, they say, determines design. And that is true of fillet knives. Because of the delicate nature of the work people use them for, they have a specific design. Let’s look at two of the main design features that will point you to the best knife.

Filleting knives are usually used to do some messy tasks like cleaning fish, poultry, or game. Because of this, they need handles that offer excellent grip in any and all situations. Otherwise, filleting becomes a grievous accident waiting to happen. So when looking for the a fillet knife to add to your collection of knives, take particular notice of the handle.

When it comes to the blade, a fillet knife, once again, can be likened to a scalpel. The blade has to be razor sharp, hard, and yet flexible enough to slip between bone and meat. A good fillet knife will feature a blade that is ice tempered from hardened steel. That means the stainless steel is heated to the point of achieving optimal hardening and then rapidly cooled.

Now that you know what a fillet knife does and its main design features, let’s continue on our quest to find the best fillet knife.

Perhaps you still have a few questions concerning fillet knives. I get you. After all, this is one knife that is a bit confusing. Let’s get started, shall we?

How We Reviewed Each Fillet Knife

We know how important your time is. And that’s why we took ours to review these fillet knives so as to save you the legwork. Why should you trust this review? Let me show you how we came up with this best fillet knife list, then you’ll know why.

First and foremost, we looked at the build quality of each fillet knife. Secondly, we considered the reviews of those who have had a first-hand experience with each one. These reviews, negative and positive, paint a picture of how these knives perform in a real-life situation.

Now that we’ve cleared all the preliminaries out of the way, let’s go shopping for the best fillet knife of the year. 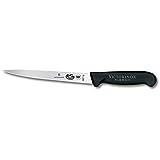 Victorinox is a name that easily recognizable in cutlery circles. That’s because they make some darn good knives. When it comes to fillet knives, their Victorinox Fibrox 7-Inch Fillet Knife is a superb fillet knife that has carved out a name for itself the world over.

The Victorinox features a high carbon steel blade that is not only superbly thin and strong but also manages to hold its edge very well. The blade is also super-straight and has a flexible edge that does a splendid job of slicing through raw meat and fish. Coming with an NFS approved polypropylene handle, this could be the best knife to add to your kitchen as the handle offers an excellent grip. It is a very effective fillet knife that is a pleasure to use.

The 4.4 out of 5 stars rated Victorinox Fibrox 7-Inch Fillet Knife will definitely be a good addition to your kitchen. That is especially true since it comes with a budget-friendly price tag of $ to $. 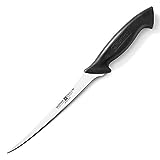 Wusthof is a household name when it comes to high-quality, affordable cutlery. They make some of the most reliable, dependable, and durable knives on the market. One great example is the Wusthof Pro 9-Inch Fish Fillet Knife.

The Wusthof Pro 9-Inch Fish Fillet Knife is on the longer end of the spectrum as far as fillet knives go. That makes it well-suited for filleting larger fish, like salmon, and larger cuts of meat. The extremely thin, tapered blade is very efficient for removing fish skin with ease, making this the best knife as far as fish preparation is concerned. The only downside to this awesome knife is that, due to its length, it doesn’t work so well with poultry and small game.

If, however, you are a fan of seafood, this 4 out of 5 stars rated fillet knife will definitely help you make short work of your meals. All it will demand from you is a $ to $ cut in your budget for it to come home with you. 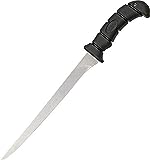 The Ka-Bar 9-inch Fillet Knife is specifically for hunting, but who’s to say it won’t do a great job in your kitchen? This is definitely a strong contender for the best knife award, especially if you love your game meat (which tends to be somewhat tougher).

Because it’s design is for hunting, the Ka-Bar features a long blade, 9-inches long to be exact. The overall length of the knife goes all the way to just being shy of 14-inches. That makes the KA-Bar a star when it comes to larger pieces of meat, fish included.

The Ka-Bar’s greatest strength lies in its blade, literally. The blade is rust-resistant 440A steel with a Rockwell hardness of 55 – 57. Translated, that means it is both tough and flexible, the qualities that make for an excellent fillet knife. The steel type and strength also mean the blade will be durable and maintain its razor sharp edge for a long time — affording you precision cutting every time you pull it out.

When it comes to the handle, the Ka-Bar probably has one of the best handles you can find on any fillet knife. The handle is made from a slip-resistant, black Kraton G elastomer handle. This type of synthetic rubber is very tough and resistant to most of the elements that would otherwise make any handle lose its integrity. The handle also offers a solid comfortable grip that makes it easy to finish cleaning your game without suffering from hand fatigue. This is definitely a knife that deserves its 5 out of 5 stars rating and the $ to $ price tag it dons. 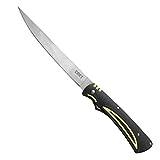 The Columbia River Clark Fork Folding Fillet Knife is a fillet knife with a twist. Instead of coming with the standard open knife design, it’s a foldable knife. Again, like the Ka-Bar, it was designed with hunters in mind. But it too will certainly fare well in the kitchen. That is because the traditional design will blend in with your cutlery while the folding feature is excellent as it takes safety to another level. The knife comes with a sturdy tail-lock that prevents the knife from opening or closing by itself, ensuring that it is safe to use.

Performance wise, this could easily be a good fillet knife on the market. It offers exceptional flexibility and precise cuts that you will struggle to find in many a knife. Columbia River struck a good balance between blade length and handle on this fillet knife, resulting in a well-balanced and easy-to-use knife. And once you fold it up, the compact size makes it easy to store the knife, whether in your kitchen drawer or tackle box.

But the greatest feature of this fillet knife lies in its price. For a 4.5 out of 5 stars rated fillet knife, the $ to $ price tag is a steal. The Columbia River Clark Fork Folding Fillet Knife is definitely a cut above the rest. 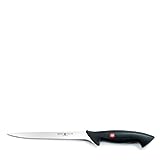 Wusthof have another fillet knife in their drawers, but this time it is more versatile than the 9-inch fish fillet knife. It’s the acclaimed 8-inch Wusthof Pro Flex Fillet Knife.

The Wusthof Pro Flex is high-grade carbon steel. That means it is well able to handle the strenuous demands of a commercial kitchen. With a handle made from a very durable and yet comfortable to grip plastic, you can use this fillet knife for the better part of the day without succumbing to fatigue. Its advantages go beyond ergonomics, however, as the handle is also resistant to water and the bad odors that often plague many a fillet knife — especially those with wooden handles.

The blade is made from high-quality German steel and is rust resistant. It also offers nice precision cuts, making it a favorite of many cooks. And that shows as the $ to $ Wusthof Pro Flex Fillet Knife has earned itself a whopping 4.7 out of 5 stars rating.

The grip is firm and solid, thanks to the riveted Staglon handle. No matter how messy the task at hand may get, you won’t risk injury due to the knife slipping. That’s just how good the handle is. For hunters and fishermen, the lanyard hole is an extra feature that you will appreciate. It will make it easy for you to travel with your favorite knife. The Schrade Steelhead also comes with a gorgeous leather sheath to keep the knife from causing injury and for easy safe storage.

If you are looking for a fillet knife as far as budget-friendly ones go, this $ to $ Schrade Steelhead option might just be the one. Despite the low price, the performance is definitely up there with the best. This earns it a stellar 4.1 out of 5 stars. 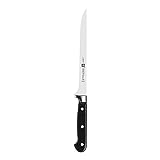 J.A. Henckels has a reputation for creating exceptional cutlery. A good example of that is the J.A Henckel’s Pro”S” fillet knife. Featuring a thin flexible blade that allows for filleting with minimum waste, the Pro S delivers outstanding cutting performance. Small wonder it is one of the most loved fillet knives, both by professional and home chefs.

One of the pros of this particular fillet knife brings to the table is that, unlike most stamped blades, it is a forged one. The result is a well-balanced knife with long-lasting sharpness. To top it all off, the steel blade goes through a special ice-hardening process. That ensures the blade maintains its color and edge well.

The Pro S comes with Henckel’s traditional three-riveted handle for enhanced comfort and durability. Looking for the best knife? This could be it. This 4.9 out of 5 stars rated fillet knife will set you back more than the other fillet knives on this list — $ to $. But it definitely is worth the investment if you care about your cooking (and guests).

The Best Fillet Knife for Your Precision Cuts

Choosing the best fillet knife need not be like looking for a needle in a haystack. You just have to know what you are looking for. And this list of the seven best fillet knives is as good a place as any to start looking (if not better).

Still stuck as to which fillet knife among the seven is best for you? Perhaps a couple of recommendations may be of help. If you’re looking for a fillet knife, period, then the Pro S from J.A Henckel’s is definitely one you won’t regret. However, if your budget has some restrictions, the Wusthof Pro Flex is a great alternative.