There are two kinds of people in the world: those who love cooking and those who hate it. More often than not, the latter have one thing in common: They don’t have a proper knife set, and the knives that they do own are not only low quality but also blunt.

Life is much too short to be accidentally squashing your tomatoes instead of dicing them. So, if you find that you are constantly whining about your knives — or lack of them — do yourself a favor and get a good quality knife set, such as a Chicago Cutlery knife set.

Investing in a good knife set might not turn your world upside down, but it will make meal prepping significantly easier. Good knives will save you not only a lot of hassle but also quite a few tomatoes and potentially even a partner.

Because let’s be honest, whining about the quality of your knives or opting to eat takeout every single night is no aphrodisiac. If there is one lesson in life that doesn’t need to be learned the hard way, it is that a good knife set will bring harmony into your kitchen.

Chicago Cutlery was founded in 1930. Back then, it focused solely on providing sharpening services for meatpacking companies and other industry professionals.

It was not until 1969 that Chicago Cutlery knives became available to the average consumer. Today Chicago Cutlery is popular among home cooks who want their knives to do the job but who do not fancy spending thousands of dollars on a decent set.

Chicago Cutlery is also known for using taper grind technology, which means that your knives will be incredibly sharp not only when you take them out of the box but also when you re-sharpen them yourself.

A Partoku knife is a cross between a paring knife and a Santoku knife and is perfect for chopping and dicing.

All Chicago Cutlery knife sets come with a full lifetime warranty. If one — or all — of your knives break or get damaged, you get a replacement. Chicago Cutlery is known for its excellent customer service and will always make good on their promise.

How Much Does Chicago Cutlery Knife Set Cost?

We started our reviewing process by gathering and comparing all the knife sets made by Chicago Cutlery. We then picked out three of the best Chicago Cutlery knife sets based on expert reviews as well as on customer ratings and reviews on Amazon.

Chicago Cutlery Essentials is perfect for those who are moving into a new home and are on the lookout for a budget-friendly knife set. As the name suggests, this particular Chicago Cutlery knife set consists of essential knives.

Each knife in this collection features metal tangs, which improve control, balance, and strength. The handles are attached to the blades by triple stainless steel rivets, which enhance overall stability and safety.

Customers noted that this set has a knife for every occasion. They were also impressed with how durable and sharp the knives are.

Some customers also complained that the knives are not sharp enough. However, most customers found that once sharpened, they are as good as new.

If a 15-piece knife set seems excessive to you, you could also opt for a 2-piece set, a 3-piece set, or a 5-piece set. The smaller sets are somewhat cheaper and are also available on Amazon. 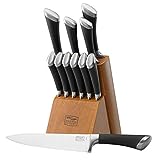 There is a reason why Chicago Cutlery Fusion is a bestseller on Amazon. This Chicago cutlery knife set is budget friendly and stylish. It is also the choice of many chefs and cooking instructors.

Bear in mind that the knives don’t line up quite straight in the block, which might cause a headache for perfectionists. Unlike the Chicago Cutlery set discussed previously, this set does not include kitchen scissors.

Each knife in this Chicago Cutlery knife set features a soft grip black poly handle for extra comfort. These knives are well-weighted and very easy to use thanks to the forged bolsters.

Keep in mind that the steak knives do not have a poly handle like the rest of the knives in this set.

On Amazon, customers gave this Chicago Cutlery knife set a rating of 4.3 out of 5 stars. Most customers were impressed with how sharp these knives are.

One customer said that one of the knives from this particular set cut through an apple like it wasn’t even there. Others noted that the knives are comfortable to use even with wet hands, thanks to the rubberized grips.

Some customers did, however, mention that the handles are not as sturdy as they should be and that they snap off easily. Others complained about rust.

This Chicago Cutlery knife set costs between $100 and $150. It is available on Amazon. A 12-piece set is also available and is slightly cheaper. 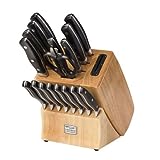 Home chefs who want a good all-around knife set but who don’t want to spend a small fortune could do far worse than opt for Chicago Cutlery Insignia2.

The most impressive feature of Chicago Cutlery Insignia2 is without a doubt the inbuilt sharpener. As such, this Chicago Cutlery knife set is perfect for those who like to keep their knives razor sharp.

The knives themselves are sturdy and durable and have polymer ergonomic handles. The latter feature means that you can use them with wet hands without worrying that they might slip and potentially hack off your toe. Bear in mind, however, that excessive sharpening is likely to leave scuff marks on the knives.

One customer even said that before he acquired this knife set, cooking was a chore. Now, it is something that he looks forward to every evening, which is probably the greatest compliment you can give a knife set. Customers also noted that this particular knife set looks very professional, which is always a bonus.

This particular Chicago Cutlery knife set is the priciest of the lot. It costs between $170 and $200 and available on Amazon.

How Do Other Knife Brands Compare?

Below, we look at three knife sets from three different cutlery brands. The knife sets below are all similar to Chicago Cutlery knife sets discussed above.

The stainless steel blades give you precise results, whereas triple-rivet plastic handles are slip-resistant and allow you to grip the knives comfortably and securely. However, unlike Chicago Cutlery Essentials this set does not include a Santoku knife. The AmazonBasics 14-piece knife set comes with a one year warranty.

Customers gave the AmazonBasics AmazonBasics 14-piece knife set a rating of 4.2 out of 5 stars on Amazon. Customers noted that this is the perfect starter knife set. They were impressed with the quality of the knives, especially seeing how this set is one of the most affordable knife sets on the market. Customers also noted that the knives are not only thick and sturdy but also quite sharp.

Nevertheless, some customers noted that the knives changed color immediately after they were hand washed. One customer jokingly said that the knives rust after you sneeze on them. Another customer was perturbed to find that the tips of some of his knives broke off. Others remarked that the knives dull very quickly and that, unfortunately, no amount of sharpening fixes the bluntness.

The AmazonBasics 14-piece knife set costs between $20 and $30. It is available on Amazon.

The knives in this set are made of German stainless steel and feature satin blade finish and forged construction. The knives also have triple-rivet handles, which mean that you will feel very comfortable gripping these knives. These knives are dishwasher safe, although it is recommended to wash them by hand. This set comes with a lifetime warranty (but it does not cover wear from normal use).

Nonetheless, some customers did have issues with the quality of the set, and in particular, with the quality of the handles. Customers were especially disappointed to hear that they were not entitled to a replacement even after the handles cracked. Others noted that the knives feel cheap and are not as sharp as they should be. Keep in mind that the block has three extra slots, which make it seem like the set is not quite complete.

J.A. Henckels International Classic knife set costs between $130 and $500, depending on where you purchase it. It is available on Amazon.

The forged steel knives in this set feature full tang design and triple-riveted handles. The handles are also labeled, which means that pulling out the wrong knife is impossible. Best of all, this unique knife set has built-in sharpeners, which sharpen straight edge knives (the 8-inch chef’s knife, the 5-inch Santoku knife, and the 4.5-inch paring knife) after every single use. On the other hand, sharpening your knives so frequently will inevitably wear them out faster. However, it is possible to pull them out without sharpening them. This set comes with a full lifetime warranty.

However, customers did complain about staining. One customer complained that she washed all her knives by hand but that nonetheless, they all developed rust almost immediately.

Some customers also thought that the knives are nowhere near as sharp as they should be, especially considering how this set comes with in-built sharpeners. Quality control and cheap-looking handle design were other issues mentioned.

Which Knife Set Makes the Cut?

Most of us spend a considerable amount of time in the kitchen. As such, choosing the ideal knife set is no joke.

The type of knife set that you will decide to go for will depend not only on your budget but also on your kitchen skills. At the very least, you want a knife set that has all the knives you could possibly need.

Those who are looking for a basic knife set that has all of the essentials should go for Chicago Cutlery Essentials. Home chefs who are a bit more picky about their knives but at the same time love a good deal should give Chicago Cutlery Insignia2 a go.

This option would also suit those who never get around to sharpening their knives. As for us, we’d go with Chicago Cutlery Fusion.

The knives in this set are comfortable to use and are incredibly sharp. It is Amazon’s bestselling knife set and the choice knife set of quite a few cooking experts.