What happens when you have dull knives that you don’t want to get rid of? You either put up with the dull blades, or you suck it up and buy new knives.

Most electric sharpeners only work on certain kitchen knives, and who has time to use a stone or manual sharpener on other knives? It turns out that there is another option: The Ken Onion knife sharpener, by Work Sharp.

The Ken Onion Edition Knife & Tool Sharpener is significantly different from other knife sharpeners. When you use it correctly, you can get razor-sharp blades in just a couple of minutes.

That means no more tossing out your favorite steak knives or butcher knives and no more scrounging to find new knives that are just as good.

Once you learn how to use this knife sharpener, you might even be able to sharpen up your grandmother’s antique paring knives and put them to use again.

What Is a Ken Onion Knife Sharpener?

The Ken Onion knife sharpener is an electric knife sharpener, but it’s not like the electric sharpeners you might picture sitting on your kitchen counter. It’s a belt sander with an adjustable angle guide.

Its design makes it suitable for sharpening every knife you’ve got, from kitchen knives to hunting knives, to utility knives.

The fact that it uses a flexible belt instead of a series of stones means you can also use it for other types of blades, like scissors, and for sharpening certain tools.

The Ken Onion knife sharpener has a variable speed motor, giving you the option of high-speed grinding or low-speed touch-ups.

You can adjust its angle guide from anywhere between 15 degrees and 30 degrees, in one-degree increments, which helps you get the best angle possible for the blade you’re sharpening.

Since this is a belt sander, rather than a stone sharpener, it uses Norton NORaX 3/4 inch by 12-inch belts, with coarseness ranging from 120-grit all the way up to 6000-grit.

The 6000-grit belt is also narrower than the other belts for better contact with the teeth on serrated blades.

That means that this sharpener needs no extra attachments to sharpen serrated blades, unlike other knife sharpeners. As such, it can work well for things like steak knives and bread knives.

Warranties and other guarantees

That warranty does not include the abrasive belts, nor does it cover commercial use. It covers consumer use only.

How customers feel about the Ken Onion knife sharpener

Customers generally give this knife sharpener good ratings. Many of them enjoy the fact that, even though they are amateurs at sharpening knives, they still get nice, newly sharpened blades without too much difficulty.

Some even use it to sharpen knives for farm work and are happy they can get their knives back to factory-level sharpness.

One person on Amazon gave it 5.0 out of 5.0 stars after buying it for the specific purpose of tearing it apart and putting all the people gushing over it in their place.

This reviewer ended up feeling embarrassed, though, after discovering that it does live up to its hype.

They said they use stones for hobby-sharpening, but if they need to fast, sharp edge, the Ken Onion knife sharpener is a great investment.

It does have its problems according to other customers, though. Some complain that it stops working after only a short period.

One person on Amazon says it quit working inside of a week while another said it broke within the first two times they used it. A third person bought one with a power button that never worked.

It comes with gears made of plastic, according to another Amazon reviewer, and they say those wear out very quickly.

Several people complain that it further dulled their blades or destroyed their knives altogether. However, it’s hard to know whether they followed directions for proper use or not, despite their claims that they did.

How much you can expect to pay for this knife sharpener depends on where you buy it. Generally, you can buy it for between $125 and $140 on Amazon.

If you prefer to buy from an outdoor store, you can buy it on Cabela’s website for between $145 and $160.

How Does the Ken Onion Knife Sharpener Compare to Other Sharpeners?

This is all well and good, but the Ken Onion knife sharpener isn’t the only belt sharpener on the market. You can’t make the right decision without knowing how a product compares to its competitors.

So how does the Ken Onion knife sharpener compare to other brands of belt sharpeners? 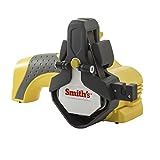 However, it’s considerably cheaper, running between $60 and $80, and it’s wireless. It comes with a rechargeable 7.2-volt lithium battery, whereas the Ken Onion sharpener requires an electric socket for power.

This can be a plus or a minus, depending on how you intend to use it. If you need something you can take anywhere (such as camping or hunting), then Smith’s definitely has an advantage.

If you need it to sharpen an entire set of kitchen knives, though, then the Smith’s sharpener could frustrate you.

Smith’s does say that the battery will fully recharge in an hour, but that’s an hour lost if you have a lot of knives to sharpen.

That makes precision sharpening for specific blades and tools more difficult. It’s slightly smaller than the Ken Onion sharpener, though, which may make it a little easier to use depending on the knives for which you’re using it.

Its small size and small belts make it great for sharpening serrated blades like steak knives and bread knives.

Smith’s doesn’t have nearly the number of customer reviews as the Ken Onion knife sharpener.

However, from what we were able to find, you get what you pay for with Smith’s; people don’t seem to think that the lower price is a good trade-off for quality. It only has 2.8 out of 5.0 stars on Amazon.

Viel’s S-5-M Sander-Grinder isn’t specifically a knife sharpener. However, the manufacturer designed it in such a way that you can use it for sharpening your knives and many other tools as well.

Unlike either Smith’s or Ken Onion, this particular grinder has only metal parts, making it more durable and long-lasting.

One of the primary things people complain about regarding both the Ken Onion sharpener and Smith’s sharpener is that their plastic parts wear out and break too quickly.

Metal is more durable, and in that respect, Viel is a higher-quality choice.

Viel’s sander-grinder does not come with an angle guide; you need to buy the separate S9 accessory to turn the grinder into a knife sharpener.

However, the accessory is just an attachable, angled plate you can easily slide onto the grinder, and it gives you 10, 15 and 20-degree angles, which are perfect for sharpening most blades.

Viel’s sander-grinder isn’t a handheld device like either Smith’s or the Ken Onion sharpener. You need a table on which to place and use it, which makes it a bit less convenient than the Ken Onion knife sharpener. It’s also considerably more expensive, running between $200 and $250.

That’s almost $100 more expensive than the Ken Onion sharpener. However, customer comments on Viel’s YouTube channel are mostly very positive. Once people watched an instructional video about how to set up and use it, they seem to love it. 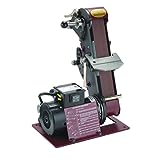 Sorby’s sander-grinder is more like Viel’s grinder than it is the Ken Onion knife sharpener. As such, it’s also not portable, and you need dedicated space in which to use it.

This particular knife sharpener doesn’t have an adjustable angle guide, but rather, the entire belt apparatus adjusts so you can grind and sharpen a large variety of blades and tools.

That may or may not make it more difficult to use than the Ken Onion knife sharpener. It depends on your level of comfort with this kind of tool and what kind of learning curve you prefer.

Sorby’s knife sharpener works very well for woodworking blades; in fact, that’s its primary purpose. Most people who use it do so to sharpen tools such as chisels, plane blades, and other heavy-duty woodworking tools.

Because of that, this sharpener may well be too powerful for kitchen knives. We had trouble finding any feedback from customers who tried to use this to sharpen their cutlery, so we can’t say with any certainty one way or the other.

It’s also a professional-grade grinder, so that’s something to take into account. The price reflects that fact; the Sorby grinder runs anywhere between $450 and $500.

Those who have bought this grinder from Amazon love how well it sharpens their woodworking tools. Many of them like how easily they can change out belts to get that perfect edge on their tools.

They also like how easy it is to change the angles to sharpen different tools. However, some complain that the belts wear out too quickly. Overall, customers give it 4.6 out of 5.0 stars on Amazon.

Pros and Cons of the Ken Onion Knife Sharpener

There’s a lot of information to process here. Don’t worry. We have a list of pros and cons to buying the Ken Onion knife sharpener that will help you make a better buying decision.

We went to Work Sharp’s website to gather information on the Ken Onion Edition Knife & Tool Sharpener, including its specifications and warranty information.

For pricing, we used Cabela’s website and Amazon as well as Work Sharp’s website. We visited company websites and used YouTube videos to bring you detailed information about competing knife sharpeners and to make our comparisons.

Finally, we used customer reviews from Cabela’s and Amazon to determine how people actually feel about this knife sharpener and its competitors.

The Bottom Line on the Ken Onion Knife Sharpener

The Ken Onion Knife & Tool Sharpener lives up to most of its hype, but not all. In comparison to other belt sharpeners, it performs better with higher quality materials.

If you’re using it to sharpen your kitchen knives, you’ll probably have a good time with it. That’s even true of your serrated knives.

The one thing that we found that could be a significant drawback is its plastic gears. If you plan to do a lot of heavy-duty sharpening on a regular basis with more than kitchen knives and hunting knives, you might want to choose either the Viel or the Sorby grinders.

If you just need to sharpen your kitchen knives, scissors, and other light and medium-weight blades, we recommend the Ken Onion knife sharpener over everything else.